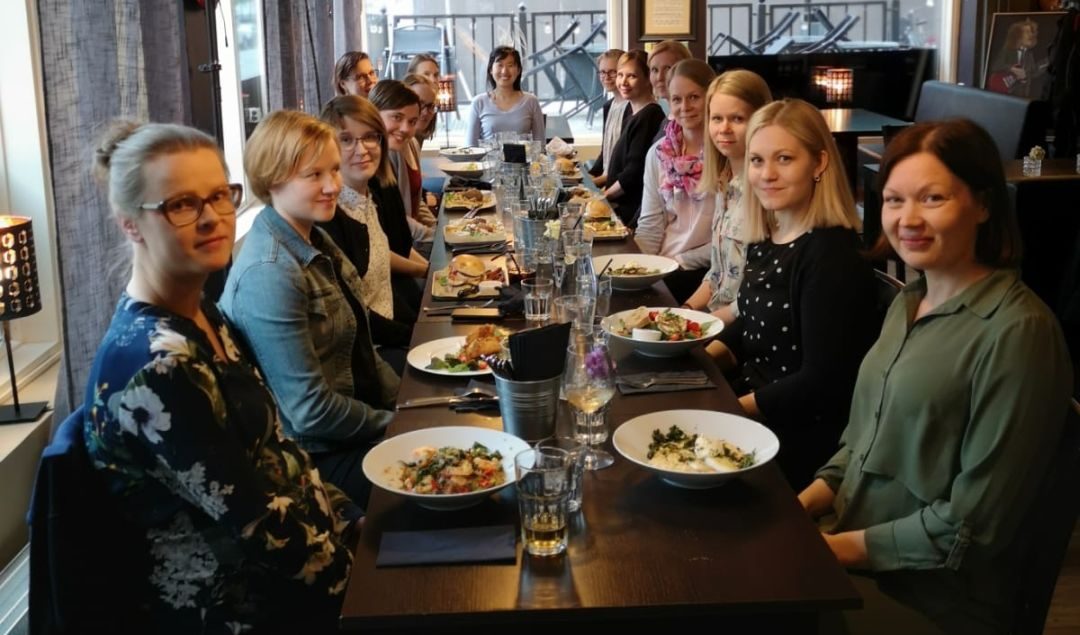 SRY organized the first ever meeting for young researchers in the field of nutrition on the 24th of May 2019. The event was held on the Kuopio campus of the University of Eastern Finland with 17 participants.  Some of them came all the way from Helsinki or even Turku so there was no better way to start the meeting than a small snack and coffee which was prepared in the teaching kitchen of the clinical nutrition unit. The icing on a cake after the long trip was a refreshing afternoon stretching session by Maria Lankinen before the other activities.

The meeting consisted of three session: 1) introduction of research of the Institute of Public Health and Clinical Nutrition at the University of Eastern Finland 2) networking and 3) dinner during which the networking was continued. Invited experienced researchers, Maria Lankinen, docent of nutrition (lipid metabolism), Kati Hanhineva, the group leader of food and nutritional metabolomics researcher, professor Marjukka Kolehmainen and professor Ursula Schwab, from the Institute of Public Health and Clinical Nutrition came on the stage in the first session. In addition to introducing the research they described their career paths. First speaker was Maria, who got a title of docent of nutrition (lipid metabolism) on the same day, following the second speaker Kati Hanhineva. Third and fourth speakers were Marjukka Kolehmainen and Ursula Schwab. They all gave inspiring presentations about their career and research areas. On top of that, all the experienced researchers gave some tips for young researchers in their early career, such as be open, humble and interested.

Since one of the most important goal of the day was to get to know other young researchers, the second session was dedicated to networking. First, everyone had a chance to introduce themselves and their research with one slide of Powerpoint presentation. Then in small groups given topics regarding researchers’ work and life were discussed. Afterwards the interesting discussions were summed up together. It consisted of how to manage all the tasks with appropriate time and at the same time enjoy family life. It was also shared in all groups that how lucky we all are that we can do such an interesting work. Additionally, ideas for future meetings were discussed.

After the highly scientific day program a three-course dinner was served at King’s Crown until late evening. The dinner was surrounded by happy and relaxed atmosphere. The day ended with smiles on young researchers’ face. Everyone is looking forward to our next meeting.